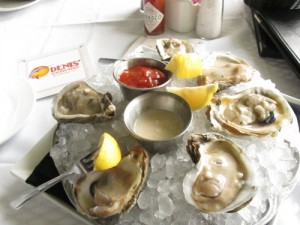 My first Texas oysters of the season came from “south of Corpus Christi” according to the waiter at Denis’ Seafood on I-10 in Houston. I assume he meant Corpus Christi Bay, which is indeed just south of the city named for the body of Christ. The oysters were surprisingly fat for early November. “Last year we got most of our oysters from Louisiana,” the waiter said. I was charged $6.99 for half a dozen.

Matagorda Bay, Espiritu Santo Bay, San Antonio Bay and Corpus Christi Bay will probably outproduce Galveston Bay this year. Galveston Bay is still recovering from hurricane Ike and subsequent efforts to rebuild some reefs. The southerly bays are shallower and most of the oystermen down there use small skiffs instead of big Galveston style oyster lugs, so oystering takes a lot longer.

Exactly what’s going on in the oyster business across the Gulf will be a frequent topic on this blog for the next couple of months leading up to the big Foodways Texas Symposium at the Texas A&M campus on Galveston Island in late February.