Katie Walsh comments on a recent article in the Daily Texan:

The chile relleno at Matt’s El Rancho in Austin—which was Lyndon B. Johnson’s favorite dish here—came covered in queso instead of ranchero sauce, by request. 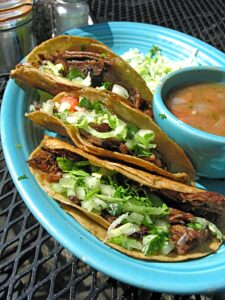 My sister Julia ordered the Grilled Old Fashioned tacos, which we’ve been eating here for at least 20 years. We’d just caught wind of the recent Daily Texan opinion piece, and we both took a moment to marvel over the absurdity of insulting such beautiful, delicious food before happily digging in.

In case you missed it: Last week, in a twisted shout to the 65th anniversary of the family-owned establishment, a columnist named Audrey wrote that Tex-Mex was “distinguishably disgusting”; “white-trash snack food wearing an inauthentic Mexican mask.” I have so many questions, Audrey.

Where ya from? How many Google clicks did you give your research? Ever *eaten* at Matt’s? And most importantly, where the heck have you been getting your Tex-Mex?

Matt’s El Rancho was opened by Matt and Janie Martinez in 1952. Matt grew up selling tamales, chili and pralines out of a wooden pushcart on Congress Avenue for his father, who had a Tex-Mex joint called El Original. Today, Matt and Janie’s daughters run the restaurant. The recipes have been passed down for generations and the in-house tortilla factory grinds its own non-GMO corn. Like many of our Tex-Mex staples here in town, they’ve even got multiple vegetarian options, @veg_lomein.

I’m not sure why you chose the anniversary of the Martinez family legacy as the occasion for your uninformed rant, but I apologize to them on your behalf, and tbh I’m kinda stunned at your ability to mindlessly erase the history of an entire family and an entire culture in a few poorly-formed generalizations.

This isn’t the first time someone bashed Tex-Mex with the ugly bastard stick. Back in 2012, I wrote a piece for Latino Magazine about the ongoing, impassioned fight about Mexican food culture and the lines we draw between “authentic” Mexican and the ever-evolving foodways of Mexican-Americans. Purists like author Diana Kennedy agree that Tex-Mex is “inauthentic,” but the question is, to whom?

As yourself and Diana and countless others like you have failed to recognize, the American regional cuisine known as Tex-Mex is and always has been Texan, even as the political and geographical lines that define the state changed. Tex-Mex cuisine actually dates back to the Spanish mission era of the 1700s, and tells the unique sociological story of Tejanos: native Texan peoples, Mexican-born Texans, and their descendants.

Tejano history is deep and rich, and it has been the driving cultural force in Texas since long before any of us had opinions about the authenticity of its food. After learning Spanish agricultural practices, Tejanos created the iconic Texas ranching tradition—which, by the way, would later be adopted by the Czech and Central European settlers you’d rather we celebrate. Tex-Mex is the food of Tejanos.

In his book “Taco USA: How Mexican Food Conquered America,” Gustavo Arellano illustrates the dismissal of Tex-Mex and other modern, American-born adaptations of Mexican food as a dismissal of Mexican-Americans themselves with this quote from writer Jesse Sanchez:

“Tex-Mex is important to us because it’s our bond to Mexico, even for us born in the United States. And it’s just Mexican food to us. Are we less Mexican or Mexican-American because we are Tejanos? We consider ourselves all part of the ‘Mexican food’ family and are surprised to hear when people speak of our food—or us—with disdain. The critiques sound elitist to us, and that says a lot coming from a state where we claim everything is bigger and better.”

Elitist is a good word. Audrey—girlfriend—you say that the three main ingredients of “flavorless tortillas, bland rice, and lackluster beans” “should be enough to send any well-minded consumer running in the opposite direction.” Who exactly are these “well-minded consumers”? You mean white folks with money?

Tortillas, rice, and beans are central to the cuisine of many Latino cultures, including “authentic” Mexico’s. They are often important foods for the nutrition and survival of the working poor and impoverished (and even some of your fellow students), and both in restaurants and in family kitchens they are prepared with the same steps and spices that have been used by grandmas and great grandmas and great great grandmas.

I actually feel bad for you. I’m so curious where you found all this tepid muck you insist is the “cornerstone” of Tex-Mex. I’ve been eating buttery flour and floral corn tortillas, veggie-studded rice, and rich, long-cooked beans since I was a baby. I’ve sampled them in numerous local Tex-Mex restaurants and in the homes of many Mexican-American friends. They are almost always bursting with flavors; soft and bold, herbal and earthy, creamy and spicy.

So Audrey, I really wanna know—who fed you such a shitty meal and why did you decide it defined a whole cuisine?

Look, I get it—you had some crappy, cold queso and some under-salted beans, you ended up in a cheap dive that reheats Mission premades and questionable meat on greasy plates, you picked the wrong restaurant—happens to the best of us. But Audrey, mama, you can’t just write off an entire people and their food because of your bad experience.

Or maybe you just don’t like it, and hey, that’s cool too!

I know plenty of folks who don’t like the heavy use of easy-melt cheeses in Tex-Mex—it “never looks too far off from Velveeta” because most of the time, it is. And there’s a reason for that. I acknowledge that it isn’t a healthy option, but nonetheless, there’s history behind it that deserves respect.

As a family friend named Richard Flores explains, Velveeta and cheeses like it likely worked their way into Tex-Mex tradition due to the historically lower socioeconomic status of Tejanos. His and many other families depended on the 5-pound blocks of “government cheese” that were handed out to low income families in the ‘70s and ‘80s to fill their enchiladas.

“You couldn’t buy queso fresco when I was a small child. It wasn’t available. So you used what you had, and what we had was American processed cheese,” Flores said.

You could’ve made a great argument for updating traditions like these now that we’ve got higher quality options. But to flippantly brand the food that defines the experience of many Mexican-Americans in this state as “white-trash” and “inauthentic” isn’t only terribly misinformed, it is a perfect example of the tone-deaf ignorance that continues to distance white folks from our brethren of color, at a time when what we really need is solidarity.

To then suggest that we should instead focus on the European influences on our state is, whether you intended it or realized it or not, both a racist and neocolonialist way to look at the world.

As a matter of fact, Texas’s other most famous food, barbecue, has long suffered from this very same racist viewpoint. While Mexican vaqueros and African-American chuck wagon cooks contributed equally to Texas barbecue history, it is often only the Czech and German traditions which receive recognition and credit. Oops.

I’m really, really sorry you had such a bad bowl of queso. But don’t be a jerk, Audrey. Tejanos aren’t white trash, their food isn’t disgusting or flavorless, and Texans don’t deserve better. In case you haven’t heard—no matter what tradition we come from—we’re already the best.