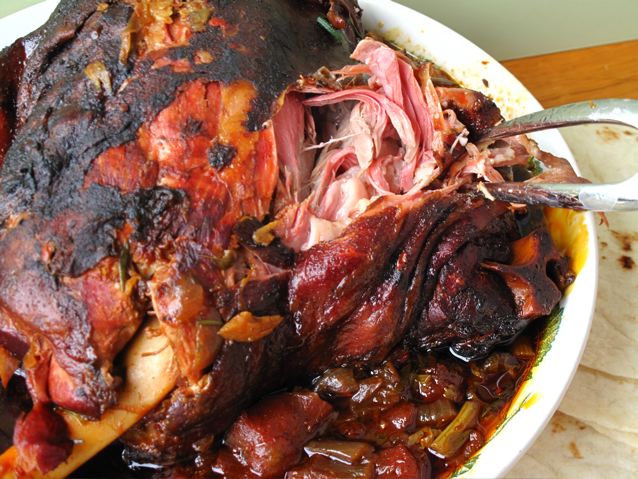 From the Houston Press Eating Our Words blog:

This recipe originally appeared during the rodeo barbecue cook-off. It’s complicated, but the results are spectacular.

Borrego actually means mutton in Spanish, but for some reason, Anglos are more comfortable translating it to “lamb.” Which is odd when you think about it, since Anglos are usually squeamish about eating veal, suckling pig, tiny cabritos and other baby animals.

Mutton used to be a traditional meat in Texas barbecue and is still found at a few African-American barbecue joints such as Ruthie’s in Navasota and Sam’s in Austin. So call this “Mexican mutton barbecue” if you like.The smoky-flavored, falling-off-the-bone tender meat this recipe yields is even tastier than the the stewed goat dish called birria.

Mexican barbacoa is still made in a smoker by a few Tejano barbecue enthusiasts, but commercial pit barbacoa is all but extinct in Texas. Vera’s in Brownsville is one of the last restaurants in the state to use a real pit to make barbacoa. In the old days, Mexican ranch hands used to wrap cow heads up in canvas or maguey leaves and bury them in the coals. (In the movie Giant, Elizabeth Taylor faints when they unwrap the package and show her the head.) But health departments frown on such traditional barbacoa these days.

Square-cut lamb shoulder isn’t the most common roast in the world, but if your butcher can’t find one, try a Mexican meat market.

Hope you’ve five or six hours, because this ain’t fast food. Make sure you’ve got everything you need before you get started.

Rub the lamb roast with seasonings and allow to marinate for a few hours. Light about 25 charcoal briquettes in a chimney and prepare a grill with the coals on one side only. Brown the lamb roast over the hot fire for a few minutes, turning often. Move it to the cool side of the grill or to the smoking chamber of an offset barbecue smoker. Put some hardwood on the coals and close the lid. Allow the roast to smoke for an hour and a half to two hours at around 250 degrees turning to cook evenly.

Meanwhile, in a saucepan over low heat, simmer the chiles in water to cover. Allow them to sit in the hot water for ten to twenty minutes until soft. Puree the chiles in a blender adding the soaking water a little at a time until the puree is smooth.

In a soup pot, heat the oil over medium heat and add the onions and celery. Stir and cook for five minutes or until softened. Add the garlic and cook another few minutes. Add the chile puree and cook for a three minutes stirring well. Add the remaining vegetables and herbs and 8 cups of water and bring the mixture to a boil. Turn down the heat and allow to simmer while the lamb smokes.

Add more charcoal and wood to the fire. Place a metal roasting pan on the grill directly

over the coals. Carefully pour the chile broth into the roasting pan. Place the lamb roast in the roasting pan with the soup, rib bones down.
Allow the lamb to simmer and smoke for an hour to an hour and half, replenishing the liquid level if needed.

With the aid of fire gloves or pot holders, cover the roast and the roasting pan with aluminum foil and seal tightly. Simmer over the coals or in a 300 oven for another hour or 2 until the lamb meat is extremely tender. You want the roast to be intact, but the meat to be very soft.

Allow the roast to cool slightly. Clean the meat away from the bones and chop lightly. Serve the cleaned meat in some chile broth. You can also serve some of the broth in a cup as a first course. Warm the flour tortillas. Warm the refried beans. Combine the chopped cilantro with the chopped onions and place in a bowl on the table. Everybody get to make their own tacos.

Yields around 4 pounds of meat.