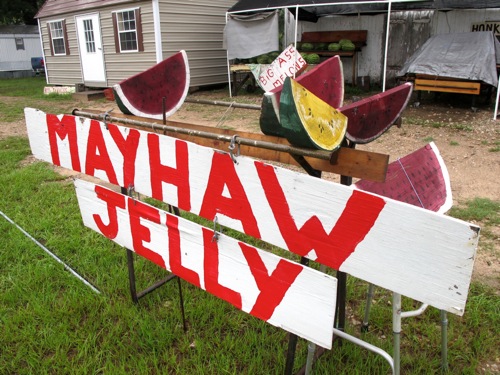 The same East Texas produce stand that had the “Big Ass Melons” sign I posted previously also had this great mayhaw jelly sign. I didn’t buy any because I loaded up on mayhaws this season to make my own jelly. I still have a gallon in my freezer. I am a little tired of mayhaw jelly though and I started thinking of other things to do with mayhaws. A mayhaw margarita came immediately to mind. But instead of trying to perfect the mayhaw syrup myself, I gave some mayhaws to Bobby Heugel at Anvil. Bobby had never heard of mayhaws.

I told him it was a fruit that grew wild in East Texas and is now being farmed in the Big Thicket. It’s the fruit of the hawthorn tree and it’s only ripe for a brief period in May, hence the name “mayhaw.” The little red fruits look and taste like tiny crabapples. The tartness would make them perfect for cocktails, I told the bartender. He looked skeptical. I wondered if Bobby would throw the bag in the trash the minute I left the building.

Such was not the case. Last time I walked into Anvil, one of the bartenders offered me a free mayhaw cocktail to thank me for my contribution. He mixed up some sotol, mescal, and grapefruit juice with mayhaw syrup. It was quite refreshing. He also let me taste some mayhaw bitters the bar was brewing.

I am very proud to have made a contribution, however modest, to Texas mixology. Next time you’re in Anvil, ask for a mayhaw cocktail.