The ribs are outstanding at Martin’s Barbeque in Bryan. The brisket I sampled was very moist and tender, although it had that slightly steamed texture of a brisket that had been held for awhile in foil or a sealed hotel pan. The German potatoes are a favorite here, but all the sides are excellent. But the real attraction at Martin’s is the ancient Texas barbecue joint atmosphere. The tile floor in the kitchen has been worn down to the cement and the flues above the old brick pits are covered with creosote stalactites.

Steven Kapchinskie is the third generation pit master and propreitor of Martin’s. 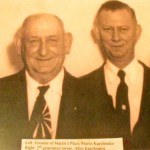 The place is named after Steven’s grandfather Martin Kapchinskie (left) who started the business in 1924. The barbecue joint has been in this building since 1939. It was owned by Steven’s father Albin Kapchinskie (right) until his death in 1980. Very little has changed in the restaurant, because as Steven explains, the whole thing is grandfathered. “If I change anything, I have to get a building permit, and then I’d have to redo everything to code. Even if I just bought a new stove, I’d have to get a vent hood.”

I say: Perfect! Keep everything just the way it is! 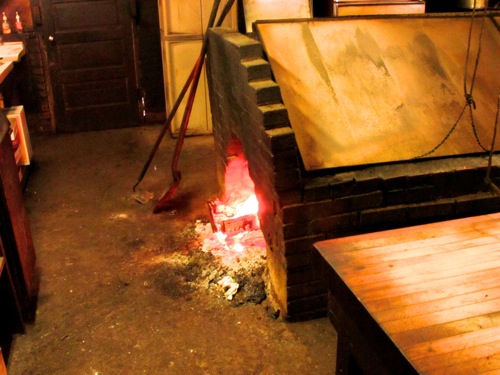 There are two barbecue pits, both made out of brick. The smaller one close to the kitchen is used for normal business, while the big one in the back gets cranked up for busy weekends and catering jobs. The smoky atmosphere was almost unbearable in the July heat. “Sometimes we have to close up for a few days in the summer to recover from heat exhaustion,” Steven told us.

Photographer Wyatt McSpadden immortalized the horseshoe-shaped counter at Martin’s in his handsome book of photos, “Texas BBQ” from University of Texas Press. I highly recommend a visit to Martin’s Barbeque for the ribs and for the atmosphere–the place is a Texas barbecue museum.

2 thoughts on “Legends of Texas BBQ: Martin's in Bryan”