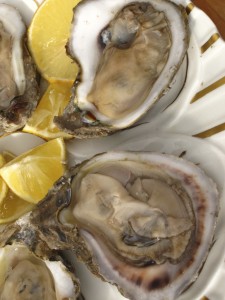 Seeing Gulf oysters sold by place names has long been a dream of mine. So the oyster panel discussion and the tasting at Gaido’s we did at the Foodways Texas symposium in Galveston was literally a dream come true. The tasting has created a lot of interest among oyster lovers. Select oysters from Pepper Grove, one of the most famous Galveston reefs, are already being sold in boxes by Jeri’s Seafood. You can sample them at Reef, Branch Water Tavern, Bootsie’s and other top restaurants this weekend. Word is that they will also start appearing in the seafood case at Central Market sometime soon.

A recent post about these oysters titled “An Oyster by Any Other Name” by my friend Katharine Shilcutt at the Houston Press “Eating Our Words” blog drew a lot of negative comments. In short, many thought the oyster by place name thing was a marketing scam. Why would you pay more for the same oysters sorted by reef? And what guarantee do you have they really came from that reef? 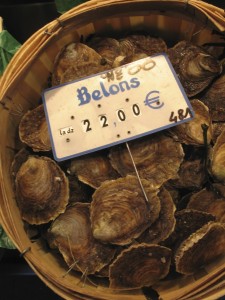 If you read my book, Sex, Death & Oysters, you know that I am the biggest skeptic there is when it comes to oyster place names. Oysters finished in the Belon river account for a tiny percent of all the “Belon oysters” sold in France. Many of the oysters called Belons began their lives in Irish waters.

The East Coast uses Texas oysters the way France uses Irish oysters–to hoodwink consumers. Reef names like Pepper Grove and Ladies’ Pass that were common in Galveston restaurants in the 1800s disappeared because oystermen made more money shipping commodity oysters to restaurants in Maryland and Virginia. They don’t care about Galveston reef names over there because the customers think they are eating oysters from Chesapeake Bay. 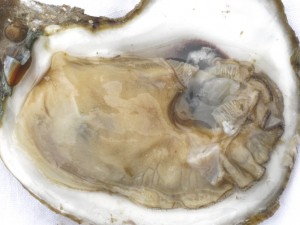 Selling oysters by place names helps people understand what they are eating. It’s easy to find out where an oyster came from–raw oysters are required by Federal law have a tag attached that specifies the date and exact place of harvest. It would be difficult to pass off fake Pepper Grove oysters on consumers with this kind of info on the bag tag. And nobody is going to risk losing their business by putting fraudulent information on the Federal bag tag. Here’s the big picture: We lost a lot more than just the reef names when we started selling Gulf oysters as a commodity product. We removed the incentive for Gulf oystermen to put quality oysters into half shell bags.

Allow me to explain. The one bushel sacks that come off an oyster lug are called “boat sacks.” I bought one once because I thought I was getting a bargain. You get around 220 oysters in an 80 pound boat sack versus 100 oysters in the standard retail sack. But you also get a lot of oysters stuck together in clusters, oysters covered with mussels, tiny oysters, misshapen oysters and oysters with weird shells. They are also filthy. Go buy a boat sack at an oyster dock and check it out.

An oysterman sorts what comes out of the boat sacks to maximize his profits. When an oyster reaches a size of three to three and a quarter inches, it begins to grow in height creating a domed shell and a fatter oyster meat. These are the most highly prized oysters. Oystermen use these for their most expensive value-added products like IQF frozen oysters on the half shell which are used to make oysters Rockefeller and other baked oyster dishes. Large oysters are also needed for shucked oysters which are used for fried oysters and other cooked oyster dishes where a consistent size is important. The going price for shucked oysters today is $40 to $50 a gallon retail. Undersized oysters and whatever choice ones that are left are put into the half shell bags. It’s usually a pretty good deal at $40 a sack, but this year the sack oysters are especially small. After the excitement generated by the Foodways Texas tasting, Oysterman Tracy Woody of Jeri’s Seafood of Smith Point started selling some premium oysters by place name. Instead of putting all of his best oysters into the IQF pile or the shucking pile, Woody is selecting large, perfectly shaped oysters and putting them into boxes with the name of the reef they came from. Top chefs are lining up to buy them because their oyster loving customers are eager to pay more for the very best. If you don’t think these “hand-selected” reef oysters are worth the higher price, order a box of Pepper Grove oysters from Jeri’s and compare them to a hundred count sack of oysters. The Jeri’s hand-selected oysters are bigger, better-shaped and cleaner. They weigh more and yield much more meat. Most importantly, the oysters from these reefs have distinct flavors. At the Grand Central Oyster bar in New York, there are more than 30 place name oysters available. Oyster lovers enjoy comparing these side by side. That’s the way oyster bars are set up in Paris, London, Toronto, San Francisco and most of the rest of the oyster eating world. Eating an assortment of oysters from different places and comparing them is a practice that goes back to the Romans.

Is it a marketing scam? Are the place name oysters more expensive? Are the oystermen making more money? Yes Yes and Yes. Put a label and a place name on a bottle of wine and the price goes up–that’s marketing. If you don’t like it, stick with wine in a box. And yes the oystermen are looking for ways to make more money in an industry that’s running on empty.

The bottom line is that this weekend you have a choice: You can pay $20 a dozen to compare big, perfect Point aux Pins and Pepper Groves at Reef. Or you can pig out on $6 a dozen sack oysters at a restaurant that looks like a boat. Or you can do both. And if you ask me, that’s very cool.

5 thoughts on “Why Pay More for Oysters with Names?”