Back in August of last year I posted an item about the Tex-Mex puffy taco. We were building the menu of El Real Tex-Mex Cafe at the time. In the process we sampled a great many puffy tacos in hopes of perfecting our own. It took a whole lot of trial and error, but when we opened we had our puffy taco ready. If you haven’t tried it yet, I invite you to check it out and tell me how it rates compared to the greats. 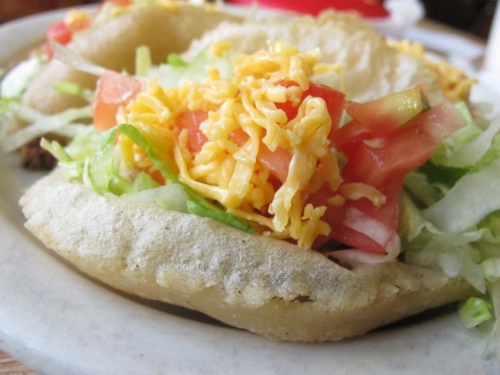 The puffy tacos at Sammy’s Mexican Restaurant in La Vernia are among the best I’ve had. They were a lot sturdier than most. As you are probably aware, the biggest problem with puffy tacos is the lack of structural integrity. 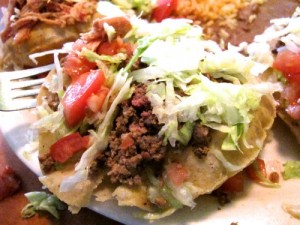 Puffy tacos have been on my mind a lot lately. A couple of days ago, I tried the incredibly fragile puffy tacos at Loma Linda on Telephone Road in Houston. They are quite tasty, but the stewed chicken version falls apart within minutes of hitting the table. The ground beef taco meat version offers a slightly longer window of dining opportunity, but both of these puffy tacos are very delicate. I am thinking these are made by frying a regular, fully-cooked corn tortilla in hot oil–just like the queso puffs.

Los Barrios puffy tacos have lately acquired legendary status. In June, the owner of Los Barrios, Diana Barrios Trevino, prepared them on the White House lawn at the invitation of President Obama. The event was called “Taste of the States” and it was a picnic for members of congress and their families. The country was split into five regions, and Diana’s puffy tacos were chosen to represent the Southwest.

13 thoughts on “The Making of a Puffy Taco”