Mutton and mutton ribs (bottom right), pork shoulder (left) and beef shoulder clod (top) were the three meat choices at the annual Millheim Father’s day BBQ. German-style red potatoes in butter and pinto beans were the sides. There was also plenty of white bread, raw onion slices and pickles available. Beer was sold inside the hall, along with desserts. I lost a couple of bucks gambling on the Cake Wheel. 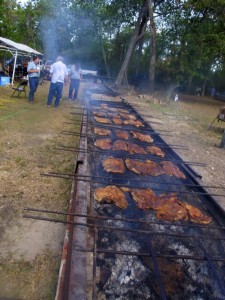 The Millheim Harmonie Verien fires up the old-fashioned open pit out back only once a year and cooks barbecue for the whole community. It’s a fund-raiser for the preservation of the dance hall. Some of the pit masters at this barbecue have been cooking for more than forty years. The German singing society was organized on August 30, 1872. The original music hall no longer exists, the current hall was built in 1938. Members of the Millheim Harmonie Verien claim their barbecue tradition goes back over a hundred years. 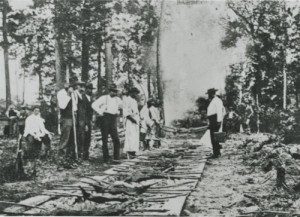 If you compare the long open pit at Millheim with photos of open pit barbecue at the turn of the last century you have to agree that they are almost exactly the same. The only difference is that open pits at the turn of the century were flush with the ground, while the pit at Millheim is slightly elevated by a course of cinder blocks and a steel rail. The meat is set on ingenious “baskets” made by welding a rebar frame with chicken wire in the center. The “barbecue gravy” is cooked in 30 gallon cast iron washtubs.

I learned about the Millheim barbecue at a symposium on Texas dance halls last year. The dance halls were built by German “verien” societies–secular organizations dedicated to choral singing, marksmanship, or some other activity. The Germans and later some Czech groups built over a thousand dance halls in Texas– some 500 still exist. Almost every hall had a barbecue pit, some of them built on the Southern-style open pit design that goes back several centuries. At least three of the old dance halls still have operating open pits. The Cat Springs dance hall hosts a barbecue in early June and another takes place on the Fourth of July in Kinney.

Walter Jetton, the barbecue impresario who catered Lyndon Johnson’s barbecues at the LBJ Ranch also cooked on an open pit. The idea of enclosing the pit to capture the smoke was crazy in Jetton’s opinion. I thought that the old open pit barbecue method had disappeared until Bubba Roese set me straight at the 105 Deli in Washington.

I asked Bubba what he thought about Kruez Market, Smitty’s and all those other German meat markets in Central Texas. “They aren’t really cooking barbecue,” Bubba told me.  “Barbecue isn’t supposed to taste smoky.”

7 thoughts on “Real Texas BBQ: Last of the Open Pits”