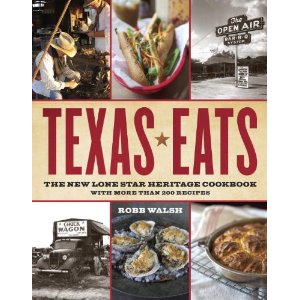 (Jacket copy) Who says cooking is for homebodies? Veteran Texas food writer Robb Walsh served as a judge at a chuck wagon cook-off, worked as a deckhand on a shrimp boat, and went mayhaw-picking in the Big Thicket. For seven years, he drove the length and breadth of the state looking for the best in barbecue, burgers, kolaches, and tacos; while scouring museums, libraries, and public archives unearthing vintage photos, culinary stories, and nearly-forgotten dishes. Then he headed home to Houston to test the recipes he’d collected back in his own kitchen. The result is Texas Eats: The New Lone Star Heritage Cookbook, a colorful and deeply personal blend of history, anecdotes, and recipes from all over the Lone Star State.

In Texas Eats, Walsh covers the standards, from chicken-fried steak to cheese enchiladas to barbecued brisket. He also makes stops in East Texas, for some good old-fashioned soul food; the Hill Country, for German- and Czech-influenced favorites; the Panhandle, for traditional cowboy cooking; and the Gulf Coast, for timeless seafood dishes and lost classics like pickled shrimp. Texas Eats even covers recent trends, like Viet-Texan fusion and Pakistani fajitas. And yes, there are recipes for those beloved-but-obscure gems: King Ranch casserole, parisa, and barbecued crabs. With more than 200 recipes and stunning food photography, Texas Eats brings the richness of Texas food history vibrantly to life and serves up a hearty helping of real Texas flavor.