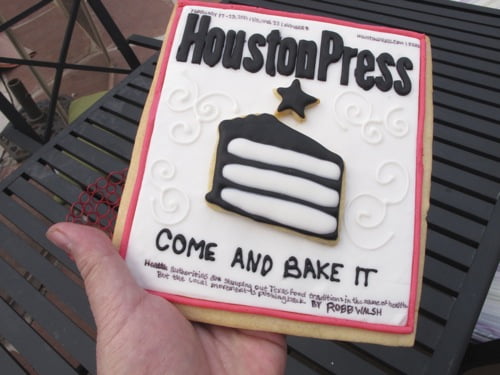 Local food lovers, Democratic and Republican state reps, the Houston Press and the Dallas Observer, and home bakers groups all pulled together to pass The Texas Cottage Food Bill, a change in the law that allowed Texas home bakers, canners and artisans to sell their homemade foods directly to the public without having to buy a million dollar insurance policy and lease a certified kitchen. (Read the Houston Press story.)

After the bill passed, new rules were drafted behind closed doors by the Department of State Health Services. These rules impose labeling requirements on homemade products like cakes and cookies that commercial bakeries don’t have to follow. Sounds like the Big Food lobbyists are working behind the scenes to kill cottage food businesses before they get started.

These new rules are now open for public comment. We need your help.

Please email
cheryl.wilson@dshs.state.tx.us
right away and tell her to “Stop Messing with the Texas Cottage Food Bill.”

Here’s a statement from one of the bills sponsors, Eddie Rodriguez of Austin:

It is clear to me that these proposed rules subvert the intent of the legislation we worked so hard to pass. We were pretty clear in trying to make it easier for small business to thrive and some of these rules proposed by the state will do just the opposite. I have spoken with the Department of State Health Services and let them know I take issue with their rules and will keep an eye on the process moving forward. I also encourage all cottage industries to weigh in immediately by sending an email to cheryl.wilson@dshs.state.tx.us. and letting them know how you feel. All comments submitted between now and February 26, 2012 will be considered as public comments for DSHS to consider as they redraft the proposed rules.