It’s hard to figure out where Texas cooking is headed right now. There are a lot of different trends going on and they have little to do with each other. In fact, sometimes it seems like the chefs in Dallas, Houston, San Antonio and Austin arrived here from different planets. In this series, I’ll check out food from some hot Texas chefs and look for clues about the big picture.


Chef Matt McCallister served lunch at Springdale Farm in Austin during the Foodways Texas Symposium last month. It was the first time I got a chance to sample the Dallas wunderkind’s cuisine. The salad was made from vegetables and flowers picked minutes ago from plants growing in the urban farm where we were seated. “Roots, leaves, stems, soil,” read the menu description. 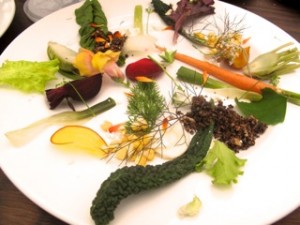 I watched as the salads were assembled by McCallister and his volunteer assistants. You sure can’t call this tweezer food–the chef encouraged his helpers not to waste time arranging things, but rather to put the ingredients randomly around the plate. Carrots, kohlrabi and beets were the roots, the leaves included dinosaur kale, chard and lettuce, dill and other herbs were the stems. The soil was an amazing blend of brown powders including sumac (a Middle Eastern ingredient sometimes used in zaatar), cocoa powder, nuts and spices. Olive oil powder was sprinkled here and there among the vegetables–it turned slippery when you reconstituted it in your mouth.

Windy Hill goat breast with rack, tongue, mousse and farro puree, yogurt, mint, poppy and carrot jam was the meat course. The goat chops were big, juicy and rare. Windy Hill in Austin raises the big meaty Boer-cross goats called “redheads.” The condiments were all very charming, but the most amazing thing on the plate was the “mousse,” a creamy goat liver paste that might be the boldest liver preparation I have ever tasted. McCallister confessed in his remarks after lunch that he had never made goat liver mousse before. I just wished I had a glass of Malbec, or a Russian Imperial Stout to savor with it. The iced tea wasn’t doing it justice.

Dessert was a careening joyride of flavors you would have never thought of combining–caramel popcorn ice cream with Texas cheddar, a reduced sweet soy sauce called kepap manis, and sesame granola. McCallister, who has renounced molecular meddling, now embraces a Dallas version of a rustic seasonal cuisine that seeks to include local and regional influences. It’s a welcome sharpening of focus for a dining scene dysfunctional enough to inspire a departing restaurant critic to write an goodbye titled: “How Dallas became a Dining Nowhereville.”

Matt McCallister helped open Campo Modern Country Bistro in the Oak Cliff neighborhood of Dallas. “The modern bistro features a seasonal menu inspired by a trip to the City of Buenos Aires and Mendoza region…reflecting French, Spanish, Italian and Portuguese influences,” states the restaurant’s website. The biggest gripe McCallister got from customers at Campo was about the size of his portions. In an interview with the Dallas Observer, McCallister responded that Dallas diners need to eat less. McCallister doesn’t work at Campo anymore, and the Dallas Morning News restaurant critic observed that the food has declined in quality since he left.

Matt McAllister’s cooking career began in 2006 with a job at Stephan Pyles in Dallas. After rising quickly through the ranks there, the ink-sporting, self-taught kitchen wiz became executive chef at the molecular-gastronomy lab at Pyles’s Fuego. Before opening Campo, he staged at the one of the foremost molecular restaurants in the country, Alinea in Chicago.

McCallister is slated to open his own restaurant, FT-33 in the fall with chef Brady Williams as his second in command. In the meantime watch for surprise appearances and guest chef gigs. You’ll find news about him on the facebook pages for Chef Matt McCallister and Matthew McCallister.

Thanks to my daughter Julia Walsh for the photos.