I spent some time in Houston with my dad On A Meat Mission, to learn about meat and how it’s cooked. Over the next several weeks we’ll be sharing recipes and tales from our meaty adventures.

A few weeks ago, I was oblivious to the French-style “tasting menu” trend sweeping the restaurant scene. Riding around Houston with Dad, he broke it down for me (as he does in this month’s Houstonia review of his birthday dinner at Tony’s); its degustation origins, its surge in popularity, its delights, and the outcries it’s inspired. On this night, he’d made reservations for just the two of us at the tasting menu half of Seth Siegel-Gardner and Terrence Gallivan’s The Pass & Provisions. 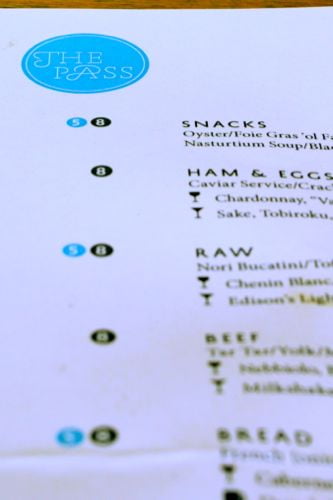 As we walked through Provisions to get to The Pass, I couldn’t help noticing that the former seemed like the place to be. Big groups, lots of laughter, colorful outfits and characters. The hostess pushed all of her weight into the far wall as we followed and it gave, an entire solid section sliding back like a hidden passageway, revealing the entrance to the quieter, dimmer, intimate dining room of The Pass.

The first morsel to hit our table was an off-menu amuse-bouche, a wildly shaped dehydrated shrimp chip served in a rough stone pedestal, like an artwork. Translucent and flecked with bits of Japanese shichimi togarashi spice and black sesame seed, it burst with flavor and then almost melted in the mouth. 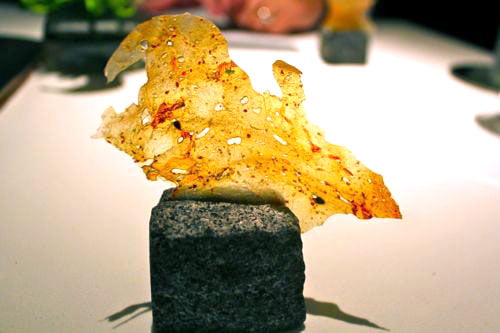 Then the tasting officially began. We each went with the full eight-course menu.

Oyster on the half shell, simple and clean with a vibrant mignonette and small sprig of fennel; Old Fashioned cocktail “foie gras” (“It’s like a jello shot!” said Dad) and a Pocky stick coated in white chocolate and dehydrated black olive, which worked way better than I expected, sweet and salty and crunchy. 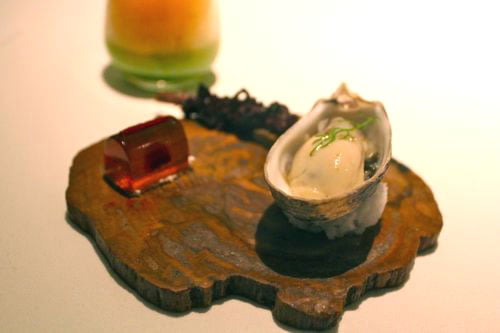 The standout of this course was a warm, pureed shot of green soup topped with a hearty dose of orange foam, made from nasturtium—all the way from its green leaves to its orange flowers. Herbal, floral, beautifully spiced and a lovely taste of comfort next to all the snacks. I took baby sips of mine, savoring every bit.

This one was among the best all night; both the dish itself and its illustration of the menu’s playfulness. Far from the sunnyside-up images that its name conjures, here “ham” referred to big, curled pieces of housemade chicharron, dusted with ham powder and served on a rustic slab of wood in the middle of the table, popping and crackling as we ate. 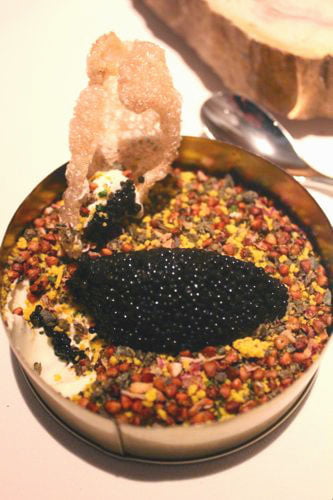 Despite the silky sophistication of the roe and the textural journey the dish brings you on, with ham powder on your fingers and chicharron crumbs stuck to your lips, it feels like you could be sitting on your couch with a game day snack.

Dad and I tore this one up. We both might as well have licked our caviar tins clean. They’re right to serve it early on, while you’ve got plenty of room and appetite.

I liked eating but loved looking at this one. Orange sherbet-colored uni (sea urchin), curls of clam and hamachi sashimi, a spiral of nori “bucatini,” tufts of smokey foam and a sprinkling of pearly salmon roe and edible flowers. I wanted to pluck the whole arrangement up and wear it like a corsage.

Flavor-wise, eh. The individual pieces were good but didn’t totally come together for me. The butter-soft fresh tofu and nori noodle were lovely, but naked and bland, while the pungency of the uni and foam went unchecked. I’m not sure what that smoke in the foam is, but it ruined the dish for me, overpowering all of those delicate flavors. 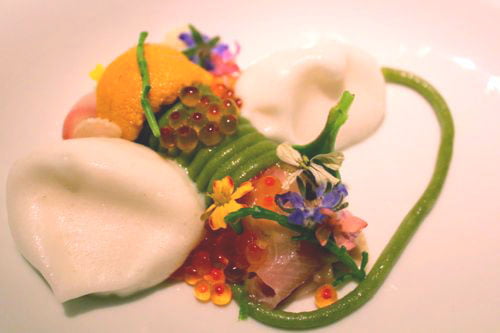 This one was a favorite. Breaking into the mound of tartare and microgreens on the plate releases a pool of egg yolk, while a bit of bone is hollowed out and converted into a “shaker” of powdered marrow, topped with a cute little golden popover (great for sopping up your extra egg yolk). 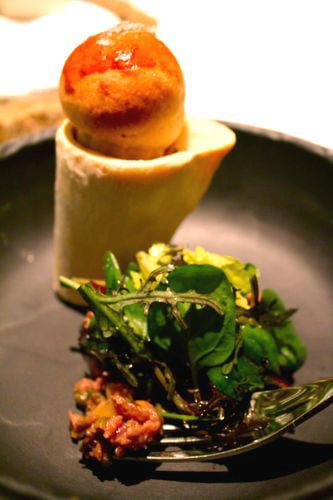 A miniature piece of onion soup-soaked French toast stands upright on the plate, accompanied by a whole symphony of onion companions. A cabernet-colored pile of red onion jam, a few caramelized pearls, delicate tissue-like layers of pickled onion, and a scoop of Spanish onion and black garlic ice cream topped with winding antlers of dehydrated Cippolini. The plate is sprinkled with a Parmesan snow, visually cuing powdered sugar—it is the most fun I’ve ever had playing between the scales of sweet and savory inherent in everyone’s favorite allium.

By this time I was starting to feel full and a little bit of richness overload—not helped by the crispy headcheese topped with chestnut puree nor decadent blood pudding, though both were incredible. I was a little scared (having never tried them before), but didn’t find a dang thing funky about either one.

The “candied apple”—bits of apple cradled in brussels sprout leaves over a smear of caramel, along with a perfect sliver of dehydrated green apple garnish—were welcome departures from all that richness, but still not quite enough to cut through it. 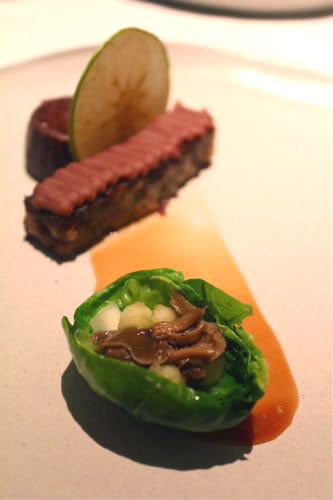 Then, slowly, things began to wind down. An off-menu intermezzo played on egg creams—inside an egg-shaped dish, a dome of egg yolk ice cream frozen with liquid nitrogen was to be cracked open and eaten with a housemade cacao soda. The soda was divine and the dish was super clever, but with continued punches of sweet and rich, I found myself longing for something lighter.

Fernet is an aromatic digestif made from a variety of herbs and spices, hailing from Italy and nationally revered in Argentina. The exact blend of ingredients changes a bit from one maker to the next, making each brand unique. This course was an herb nerd’s dream—all types of wonky-looking mushrooms, herb sprigs and bits of dehydrated this-and-that growing out of a snaking length of milk chocolate and fernet gelatin, accented with sweet beet powder, saffron ice cream, and dots of sparkling anise syrup. Dad just poked at this round. 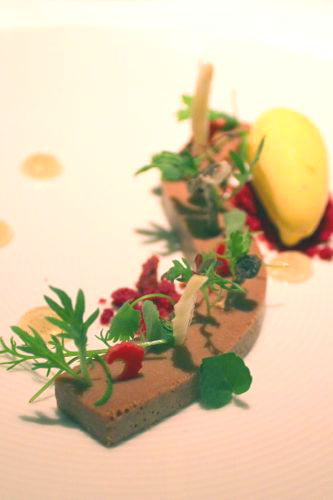 I really enjoyed it for its weirdness and reference to the many herbs used to make fernet, but as a dish I didn’t find a “wholeness” in it, just a crazy party of pieces. I was also reaching palate fatigue and growing really tired of ice cream.

A pile of golden fried little doughnuts, blackberries, a long thin stretch of ricotta aged in scorzonera ash and I want to say a drizzle of honey, but who knows, by this point I was struggling to stay present. 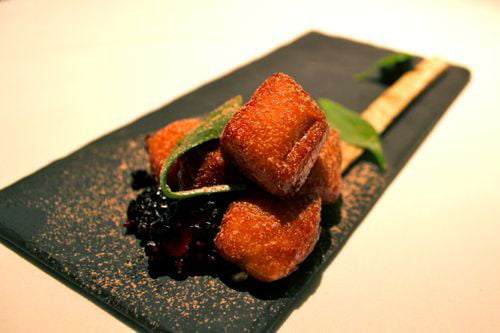 I wanted so much to enjoy the sharp earthy cheese and soft sugar-and-mustard-dusted doughnuts, but my stomach couldn’t handle the uninterrupted richness. As it approached midnight, Dad was losing steam as well.

Our bellies full and eyelids drooping, we wrapped up the last course (an arrangement of petits fours) and hit the road. Pretty as it was, I was so ready for bed I forgot to take a picture.

Overall, it was such a fun and special experience. It had been quite a while since I’d worn heels or been treated to such a high-brow meal, and especially since I’d hogged Dad’s dinner company all to myself. We clinked glasses of rosé champagne, speculated on strange flavors, and mused on the makings of a great tasting menu.

The experience of dining at The Pass felt a little like getting admitted to VIP at a concert. Pressed white tablecloths and empty walls, velvety black seats, everyone gussied up and in quiet conversation, the peek “backstage” into the open kitchen—it felt like an exclusive treat to be there, sheltered from the raucous crowd outside.

The service was incredible; in a highly syncopated dance, waitstaff, the two chefs and the dapper sommelier whisked out onto the floor in intervals, offering each guest detailed and diligent attention.

I feel like there were a few missed opportunities to cleanse the palate and settle the stomach at the end of the meal, a lack of crisp flavors like citrus or ginger and overload of sweetness, dairy and fat.

Although each individual course is intricate and clearly well thought out, I got the sense that the menu as a whole was never really tested out, from soup to nuts. It’s so heavy on back-to-back bold and creamy flavors that it’s difficult to make it all the way through with a full appreciation for each dish.

…and a taste of the tease. On the drive home, after describing the feeling of being full but not really satisfied, Dad looked at me with a smirk and asked. “Want a Whataburger?”