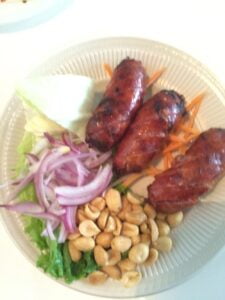 Hot and spicy Isan Thai food is brimming with fish sauce, bird chiles and fresh herbs–with none of the comforting coconut milk found in Southern Thai cuisine. Sour sausage with raw cabbage, peanuts and bird chiles may not sound like a typical Thai dish, but it is a favorite Isan bar snack.

There is not a lot of Isan food in Texas, but that is about to change. I’m predicting a tide of nam jim jaew (the Northeast’s piquant answer to Southern Thailand’s Sri Racha) will wash over Houston any day now. And to prepare for the rush, I visited Lan Larb Soho, an Isan restaurant in Manhattan. Northeastern Thai food has been gaining in popularity for several decades in Queens, but its arrival in Manhattan is something new, Eater’s Robert Sietsama told me. 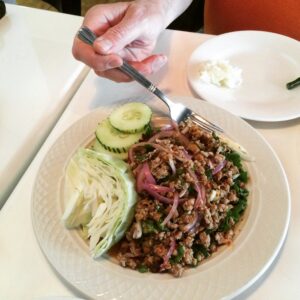 Sietsama joined my wife and me at Lan Larb Soho, where he recommended the sensational duck larb. Ground duck meat is highly seasoned and fried so that the bits of skin become very crispy–then its tossed with fish sauce dressing with fresh mint and raw red onions. You can use the raw cabbage leaves served on the side to make bite-size rolls. We also sampled a wonderfully spicy seafood soup with a tamarind broth. 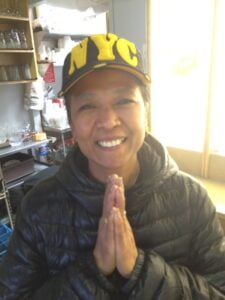 Sietsama introduced me to Chef Ratchanee Sumpatboon, the restaurant’s owner and the woman credited with bringing Isan food to New York. Sumpatboon, who once ran a restaurant in Northeast Thailand, worked at Chao Thai and opened Poodam in Queens, then consulted at Zabb Elee in the East Village after closing Poodam and before opening her highly-acclaimed restaurant, Larb Ubol in Hell’s Kitchen.

Known for stultifying heat, Khmer ruins and rowdy festivals, the hot mesa of Isan in northeast Thailand is named after “Pra Isuan”, the ancient Thai name for Shiva, the Hindu god of destruction. Its the poorest of Thailand’s regions and the least fertile. Northeast Thailand borders Laos and Cambodia and its cuisine is influenced by its neighbors. The dried chile and galangal paste called jaew in Thailand and jeow bong in Laos is a favorite flavoring in Isan food and the base for its popular dipping sauces.

We also ordered som tum poo pla-ra at Lan Larb Soho. Som tum, the green papaya slaw seasoned with chiles and fish sauce, is an Isan dish–the variation known as “tum poo pla-ra” includes small fermented rice paddy crabs which are pounded (shell and all) and added to the salad. While I sucked on a cracked crab, I remembered the time I took my Houston Press editor, Catherine Matusow, to dinner at Vieng Thai on Long Point road in Houston and ordered the poo pla-ra papaya slaw. After nearly cracking her teeth on a couple of crab shells, Matusow shoved the dish across the table at me with no small measure of disdain. She still brings the incident up now and then when the conversation turns to nasty restaurant surprises.

There are no curries or coconut milk soups at Larb Ubol–it is pure Isan food. But at the two Lan Larb restaurants (one in Soho on Centre Street, the other on First Avenue), there are a few Southern Thai-style curries on the menu to satisfy the office workers who come in for lunch.

Expect a surge of Isan cooking in Texas, with some interesting new dishes turning up on the menus of cutting edge Asian restaurants. Do yourself a favor and give the hot and spicy versions of larb, som tum salad, and tamarind-based soups a try.

Check out this recipe for nam jim jaew. If you decide to try to make it, you will need to find some Thai fish sauce–failing that, I recommend you substitute Vietnamese Red Boat fish sauce.