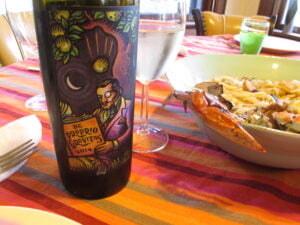 Gravitas from Boony Doon is a California tribute to the white wines of the French Graves region. Made with lots of Semillion to smooth out the Sauvignon Blanc, I like this wine a lot better than many of the “flinty” Graves whites I have sampled. The crisp clean citrus flavors and aroma derived from the unusual addition of Orange Muscat make it a stunning choice with Gulf Seafood. At $16 a bottle it won’t break the bank.

Ever the iconoclast, Randall Graham at Bonny Doon is bucking the trend in American wine making to ignore the role of a wine as part of a meal. A great many Americans wine drinkers think of a wine as a cocktail substitute. As a result, most American vintners specialize in wines that taste good at Happy Hour, but lack the acidity and substance to shine at Dinner Time. This leaves food lovers in a bit of a quandry.

Let’s say you live on the coast and eat a lot of seafood. And you want a nice tart white or a crisp rosé to complement broiled red snapper, a plate of oysters or a crab stew. Oaky, buttery, low-acid Chardonnay is California’s most famous white, but it is exactly what you DON’T want with a plate of fish. So where do you turn? French Muscadet and other tart Loire Valley whites are the usual suspects. Flinty Sauvignon blancs from Graves are a good bet. But the prices are getting ridiculous.

Le Cigare Volant is the same sort of bargain—it’s a California take on the Chateauneuf-du-Pape style from the famous Bonny Doon Vineyards. The label just celebrated its 25th anniversary. The name, which means “flying cigar” in French, is a joke about an ordinance passed in the Chateauneuf-du-Pape wine region that forbids flying saucers from landing there. Hence the hilarious artwork on the label. The wine first came out in the 1980s, when Randall Graham of Bonny Doon Vineyards founded a renegade group of California wine makers who called themselves “the Rhone Rangers.”

The Rhone Rangers to the Rescue! 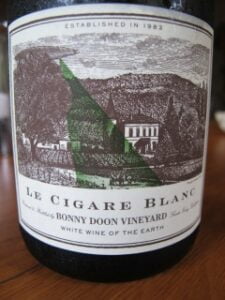 Boony Doon once led the ABC movement (anything but Chardonnay/Cabernet) and still excels in making wines that depart from the beaten path. Le Cigare Blanc is Bonny Doon’s take on the famous white wines of the Rhone and a stunning choice with seafood. The rich flavor might remind you of ripe pears. $28 a bottle, is a nice price on a big deal white.

Bonny Doon’s Vin Gris de Cigare is a rosé lovers dream come true. I shared a bottle of this tart, complex pink wine with rosé collector Bryan Davis, the manager of the Ocean Grille on the Seawall. I think it’s fair to say he was blown away by the faux Chateauneuf rosé. At around $18 a bottle this is a screaming bargain.

For more ideas on American wines that pair well with seafood, check out the winners of Taylor Shellfish Farms 2014 Oyster Wine Competition winners.