The shockingly delicious combo of giant Spanish Queen olives stuffed with goat cheese and tossed with olive oil, honey and chopped apples will make you reconsider your preconceptions about how to eat olives. And the brightly tart combination of black pitted olives in a minced orange marinade will likely show up on my Thanksgiving table. (Although I may tweak the recipe to use up all the ripe fruit from my kumquat tree.) I used to be an olive snob who only served olives with pits–to the chagrin of my younger children. But lately, my olive horizons have widened.

Who knew you could take grocery store canned olives and turn them into a sexy appetizer with ingredients you probably already have in your fridge? The goat cheese-stuffed olives and another app of black olives with citrus were two of three sample dishes at the Olives from Spain booth at a recent Spanish food and wine showcase called Spain’s Great Match at Silver Street Studios in Houston. In past years, the Spanish olive producers have asked American chefs to come up with exciting restaurant dishes with olives. This year, their goal was to show American home cooks how easy it is to create cool olive dishes at home.

It was Frank Sinatra, Dean Martin and the “Rat Pack” that made the martini garnished with a green olive stuffed with pimiento an American classic. Sales of the stuffed Spanish olives took off and the U.S. has been the largest export market for Spanish olives ever since.

Olives from Spain is the name of the Spanish olive producers association, look for their logo in the olive section of the grocery store. (That’s not much of a challenge since Spain produces the majority of olives consumed in the U.S. including 95% of the pimiento-stuffed olives.) 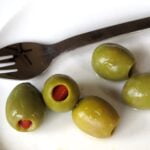 Spain has a rich tradition of olive production and olive cookery, olive trees have been growing there since the first century.Today the highly modernized Spanish olive industry leads the world in quality and food safety standards. Spain also boasts the widest range of flavors in a staggering variety of olive types including top sellers like Manzanilla, Hojiblanca, Gordal and Cacereña, specialty olives like Carrasqueña, Aloreña,Verdial, Cuquillo, Lechín and Empeltre, and my favorite, the itty-bitty Arbequina.

Like olive oil, olives are good for you, they contain monounsaturated fat (the good kind).

If you’re using the Mediterranean diet as a model, olives are great in pizzas, salads, pastas, rice, meat dishes, fish dishes, and stews, and as a table snack with an endless variety of stuffings including anchovy and blue cheese. Mexican and Californian cooking traditions reflect the Spanish introduction of olives to the New World centuries ago. Black olives have become a familiar part of Americanized Mexican food—especially Cal-Mex. Huachinango (Red Snapper) Veracruzano is one of my favorite Mexican seafood dishes—and it’s loaded with olives. Modern Mexicans prefer their cocktail olives to be stuffed with jalapeños!

Full disclosure: The Olives from Spain folks hired me to spread the word about Spanish olives this month. It was my recent blog series about curing my own olives at home (my new house in Galveston has an olive tree) that caught the attention of the Spanish olive gang. Along with the descriptions of olives from around the world, I wrote one blog post about the amazing combination of Spanish green arbequina olives, Marcona almonds, and Fina sherry. I first sampled that combo at the bar of the now-shuttered Catalan restaurant—and I’ve thought about it ever since. 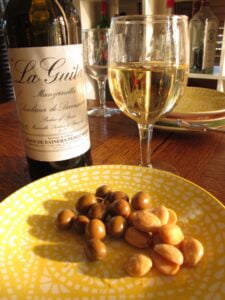 A variation on that ancient Spanish triumvarate turned up the third olive dish served at the Olives from Spain booth–it was a giant bowl of Spanish green olives and marcona almonds, mixed with chopped, slightly piquante, piquillo peppers, olive oil, sherry vinegar, honey, thyme and big chunks of cabrales, the distinctive Spanish blue cheese. It was a real show stopper. 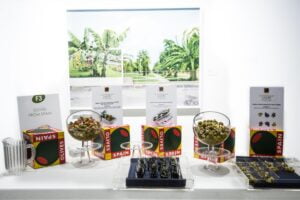 When my pal Pete Mitchell, the owner of Under the Volcano bar, came by the olive booth, I handed him a sample bowl of the Spanish olive and marcona almond mélange and walked him down to a Spanish winemaker’s booth where they were pouring samples of Fina Sherry. Pete was blown away by the uncanny combination of flavors. Don’t be surprised if Spanish olives, almonds and sherry shows up on the menu at Under the Volcano soon. What a great appetizer to kick off a Monday steak night!

Check out the recipes at the Olives from Spain website.