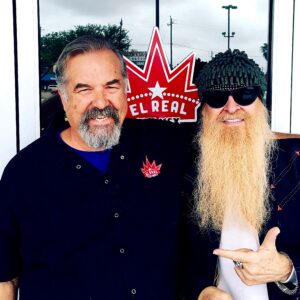 Billy Gibbons stopped by El Real Tex-Mex for brunch today. He wanted to try the bacon enchiladas–two cheese enchiladas with bacon inside and a sunny side up egg on top–it’s our number one brunch entree. Billy loved them. I gave his wife, Gilligan Gibbons, one of those northern Mexican goat’s milk caramel and pecan candies known as Glorias. That was a hit too.

We talked about the couples favorite versions of hot chocolate–they recounted awesome cups of chocolate they had been served in Paris and Madrid. Billy bought his wife a copy of the Tex-Mex Cookbook and the Chili Cookbook–she cooks at home all the time. They were knocked out by the photo of lobster in green chile with corn on the cob that’s one of the first images in the Chili Cookbook.

I once ran into Billy in the Hobby Airport food court. We were both traveling alone. I was carrying a tray of Chinese food from Golden Happy Panda Dragon or whatever that place is called. He was sitting by himself eating a plate of enchiladas with chips, salsa and a beer. I said hello and he recognized me from the restaurant and from a couple of other encounters and invited me to sit down. The Chinese food was awful and I found myself drooling over his refried beans.

“Billy, tell me the truth. Do you eat Tex-Mex at every meal?” I joked.

He said he ate lots of other stuff but there wasn’t any good Tex-Mex where he was going, so he was stocking up.