Smothered pork chops were the special on Thursday at Mama Frances Soul Kitchen. The pork chop plate comes with a mound of homemade mashed potatoes and savory brown gravy plus two sides. I went for some very porky tasting mixed collard and mustard greens and the creamy black-eyed peas.

The five-table restaurant’s slogan is “The Small Place with the Big Taste.” It’s located on Vauthier St. in La Marque. From the Vauthier exit on I-45, drive a mile or so east until you see the La Marque High School buildings on the left–Mama Frances is right across the street in tiny shopping center. The restaurant is open Monday to Friday 11 am to 6 pm.

The place is named after Shirley’s mother, who never actually worked there, but who provides inspiration from afar. Mama Frances is a home cook in the small town in South Carolina where Shirley grew up.

When Shirley was a child, Mama Frances started a catering service. Her food became so famous that patrons would pack her soul food dinners and holiday cakes in dry ice and fly them all over the country.

Mama retired recently on reaching her 80th birthday. But Shirley is betting she will reopen temporarily over the holidays. Mama Frances just can’t stay out of the kitchen. It seems like a family obsession. Shirley’s daughter Kirsten is a buyer for Whole Foods and also runs a popular muffin and cupcake bakery in Katy called Glorified Muffins.

We were the first customers for lunch at Mama Frances Soul Kitchen at 11:30 am on Thursday. Our meal began with a square of crumbly, hot out-of-the-oven cornbread and butter.

I also sampled Shirley’s spectacular gumbo, made with fresh crabs, shrimp, fish, chicken and sausage. The soup owes its depth of flavor to stock made with lots of seafood and a walnut brown roux. The gumbo isn’t always on the menu, but if its available, give it a try. 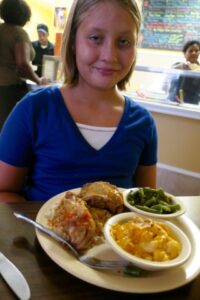 My dining companion had the succulent baked chicken with rice and peppery chicken gravy. Rice and gravy fans will love this rendition. Her sides were cheddar-rich mac n’ cheese and some unremarkable green beans. She washed these down with a cold A&W root beer.

Dessert was pear cobbler which looked glorious, but I was too full to eat it. So I ordered it to go. There was also a peach cobbler in the oven, Shirley told me, and while I was tempted to wait, I decided the chance to sample more desserts would give me an excuse to return soon.

“On Fridays, we put out a whole spread of desserts,” Shirley said.

See you there next Friday.