London is now a taco town! Over the last two years, some excellent taquerias and innovative Mexican restaurants have opened. And tacos have been deemed “the food trend of 2017” by some London food bloggers.

So we sent our correspondent, Julia Walsh, to London on a taco tour. We’ll be posting her London Taco Tour updates on Taco Tuesdays!

Here is her latest report: 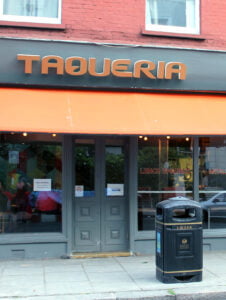 Walking down the sidewalk, you might miss Taqueria if you weren’t looking for it. The gray painted front of the building is dominated by windows painted with tacos specials, but the bright orange overhang obscures the name of the restaurant from view. I wasn’t sure I’d arrived until I saw the menu box near the door, and the smell of tacos hit my nose.

The tables were all taken when I arrived, so I choose one of the comfy leather bar seats along the window. The crowd ranged from young adults to families with small children, all happily munching their tacos. My waiter dropped off my menu with a quick smile, took my order for a drink and left me to look the menu over.

Taqueria offers an impressive sixteen different taco choices, which was the widest variety I’d seen in London. They were also the only ones I’d noticed offering “naked tacos”, or the choice of lettuce instead of a tortilla (a request I see more and more often in Texas). I had not felt starved for choice at any other place, and now the sheer number was making it pleasantly difficult to pick. Since I’d been sticking to mostly classic flavors on my trip, I decided to mix it up and order some unusual items: The Soft Shell Crab, the Plantain, and the Rolled Cheese.

I love soft shell crab, but I’d never had it on a taco and wasn’t sure what to expect. What arrived was a bed of pickled jalapeño mayo and guacamole, crowned with a golden fried crab and sprinkled with tomato. After a little coaxing, the crab folded into the tortilla so I could take a bite. My first bite was an overload of guacamole and mayo. The 2nd bite was better since I got more of that delightful crab flavor, but it still didn’t feel like it was the star of the show. I removed half of the guacamole and sour cream on the second taco and was immediately rewarded. The crab was now front and center and only supported by the other flavors. Much better! 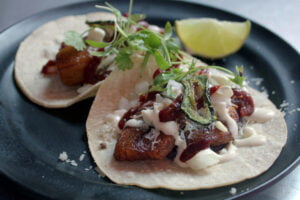 I’ve been eating plantains since childhood, so they hold a special place in my heart. The fruit is similar to a banana and is caramelized in a pan until sweet and soft, and in many places is served with refried beans and crema. I was really pleased to see that the taco was built with those flavors. I was pleasantly surprised at how well the bold, smoky chipotle sauce paired with the sweet banana and livened up a palate of creamy, earthy flavors. The raw onion and fried chile slice added texture to the mix. I don’t think it’s just the early childhood memories that made this taco so satisfying. 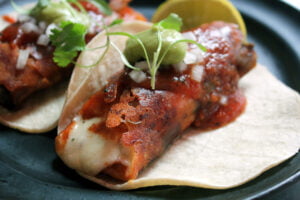 I couldn’t decide what I was going to get when I ordered the rolled cheese. It hit the table last, but it deserved a solo entrance. I believe it’s made by putting cheese down on the griddle until it becomes brown and crispy, then adding the toppings (possibly with more cheese?) and rolling it up with a spatula before placing it on the tortilla. The result is a super sexy melty cheese oozing with your topping of choice (mushroom or house-made Mexican chorizo) and all wrapped up in a layer of crispy browned cheese. The roasted tomato salsa was an excellent pairing here, bringing some sweet and acid to the molten cheese. With the mix of crispy and soft cheese and the tomato salsa, it tasted reminiscent of pizza. I would have liked to try the house-made Mexican chorizo (since I hadn’t found ANY Mexican chorizo on my entire trip to England!) but I don’t regret the mushrooms at all.

When I began to photograph my food, I attracted the attention of the manager, Juan. After chatting a bit about my experience, he filled me in on the history of the restaurant. Taqueria began as the Cool Chile company stall in Notting Hill before settling in their brick and mortar location on Westbourne Grove. Cool Chile is a tortilla and sauce purveyor, and the main supplier of tortillas in the city. Juan lamented the unfortunate timing of my visit, noting that they were out of the usual bottles of habanero sauce that adorn the tables. Taqueria changed ownership the week before I visited, so they were changing the salsas and a few other little things, but the majority of the restaurant will remain unchanged.

Overall my experience was a good one (though the corn tortillas were a bit dry). The tacos were different, and most importantly, satisfying. Taqueria chooses to use organic and free range ingredients when possible, so the prices are a bit higher than average, but I can confirm they’re worth it!