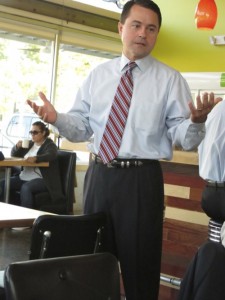 The Go Texan Restaurant Round-Up kicked off yesterday. As part of the month-long promotion, restaurants around the state will be featuring local food products and donating part of their profits to the Food Bank. Grassfed beef meatloaf at Beaver’s in Houston sounded good. So did the shrimp at Eddie V’s.

Texas Agriculture Commissioner Todd Staples hosted a breakfast at Lola’s to kick off the Houston portion of the program. Staples is from Palestine. We started talking about disappearing East Texas restaurants at the press breakfast. There aren’t many Southern-style restaurants anymore we both agreed. “I used to eat at a place called Billy Burgers in Neches when I was a state rep.,” he said. “He got homemade pies from a lady that lived nearby.” The health department doesn’t allow that today.

Over-regulation is one of the problems that makes it difficult for people to make a living, he said. Senator John Whitmire, who was also sitting at our table, agreed and said he found himself becoming more of a libertarian every day. I asked the two politicians if they would support an exemption from health department regulations that would allow home cooks to sell products like pies and preserves at farmer’s markets. (Such “Cottage Food Laws” already exist in many states.) Both Staples and Whitmire agreed that this was an excellent idea.

In fact the Texas Cottage Food Law was proposed at the 2009 session and was approved by committee, but was never voted on. The law is expected to come up again in the 2011 session, so there is time for food lovers to get on the bandwagon. But the existing bill, also called the Texas Baker’s Bill only includes cakes and cookies.

The proposed law still wouldn’t get the government off the backs of little old ladies who bake pies. We would be much better off with a law like the one the one that was passed in Michigan. Read this excerpt from an interesting guest editorial by a leader of the Michigan Cottage Food Movement on the subject:

“I can buy my daughter a Twinkie. But I can’t buy her a fresh, homemade pickle at a farmers’ market.” The words of Texas Township (Michigan) Farmers Market Manager, Donna McClurken expressed the feeling of many in the hearing room on May 5 as she testified before the Michigan House Agriculture Committee about a bill called “The Cottage Food Law.”

Every revolution encounters crossroads as it pushes forward – places where fundamental decisions about direction are made. In Michigan, House Bills 5280 and 5837 – amendments to the Michigan 2000 Food Law to allow small scale home preparation and processing of food for direct sale – constitutes such a crossroads for the Local Food Revolution.

These identical bills (one Republican, one Democratic) establish “cottage food operations” that produce “baked goods, jams, jellies, candy, snack food, cereal, granola, dry mixes, vinegar and dried herbs” as “exempt from the licensing and inspection provisions” (of the 2000 Food Law), as long as the food is (1) only sold at farmers markets, homes, farm markets or roadside stands, county fairs, town celebrations, festivals and events and (2) annual gross sales do not exceed $15,000.

Bills similar to HB 5280/5837 had been introduced in two previous legislative sessions. The May 5 hearing before the Michigan House Agriculture and Tourism Committee marked the first time this proposal had received a formal hearing.

The bills were quietly opposed by the Farm Bureau and the Michigan Department of Agriculture (MDA) on the grounds that “cottage food” products posed unfair competition to food producers who, in the words of the Farm Bureau representative at the hearing, “follow the rules.”

The MDA opposed the bill because it posed an “unwarranted hazard” in a time of increasing food contamination incidents around the nation.

These arguments have little merit. The idea that a grandmother making jam in her kitchen is somehow a threat to Welch’s is nonsense. The food safety crises of the last couple of years come almost exclusively from large-scale industrial food production shipped over long distances. There is virtually no evidence that local food production sold directly to consumers has caused any health problems. Michigan citizens are smart enough to follow common-sense food safety precautions.

In spite of this and a flood of constituent communications to legislators in favor of the “Cottage Food Bill”, its future passage was anything but certain.

The Cottage Food Bill of Michigan – like similar measures adopted by 12 other states – marks a crossroads in the local food revolution here. If it passed, the command-and-control industrial food system fueled by government subsidies and run by government inspectors to benefit large corporate food interests would be excluded from the most vibrant and diverse grassroots portion of the local food revolution.

The Cottage Food Bill represents the development of true food democracy – a local food system based on face-to-face transactions, diversity of products produced locally, and core values embedded in a hand-shake compact between producers and consumers. The raw milk movement represents another example of this kind of food democracy.

The Cottage Food Bill represented something more. For dozens, hundreds of Michigan families facing hardship in increasingly desperate financial times the bill offered them a way to supplement their income, producing food for their neighbors.

Amanda Edmonds of Ypsilanti’s Growing Hope organization told the committee the story of an unemployed woman who began such a business and grew it into a now inspected business that employed six people. The Cottage Food Bill would actually work to promote small-scale entrepreneurship, not just talk about it like a distant island we all want to visit someday.

The benefits of this kind of local food production go far beyond financial survival. Cottage food production would enable stronger community ties – building connections and resilience in a time when both are needed desperately in Michigan.