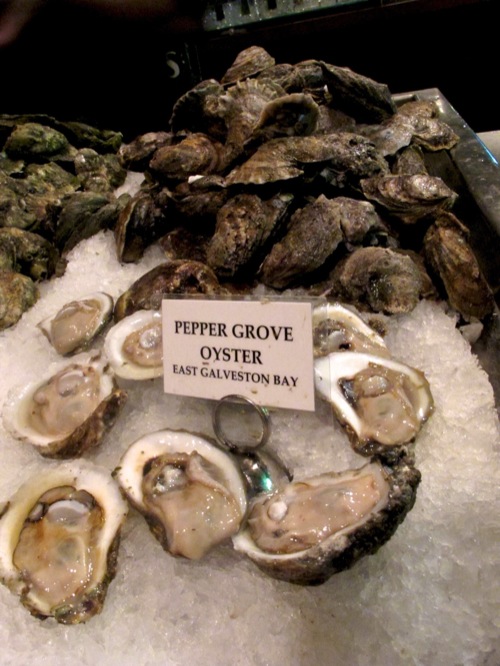 At the time of the Civil War, oysters from Pepper Grove Reef in East Galveston Bay were very popular in oyster bars. So were the oysters from Lady’s Pass and several other spots. Galveston Bay oysters were always identified by place name back in the late 1800s.

As promised in Greg Morago’s story in last Sunday’s Chron, those oyster place names were revived on Saturday. At a festive dinner at Gaido’s, attendees of the Foodways Texas “Gulf Gathering,” the organization’s first annual symposium, got a chance to participate in an historic oyster tasting. Oysters from the famous old Galveston Bay oyster appellations were carefully harvested, shucked and displayed with their place names. The new Galveston oyster bar probably looks exactly like the Galveston oyster bars of the 1880s.

Some of the Gulf’s top oyster producers were present at the dinner. Many thanks to Tracy Woody from Jeri’s Seafood, the Halilli family at Prestige Oysters, and Misho Ivic from Misho’s Oyster Company for donating the Texas oysters. And thanks to Bill Walton of Auburn University’s Shellfish Lab, and John Tesvich from Ameripure Oysters in Louisiana from bringing us some oysters from the other Gulf States.


Jim Gossen of Louisiana Foods curated the oysters and took on the difficult task of shipping them, and keeping them all straight. Gaido’s supplied the lovely private dining room and the very impressive display cases loaded with ice to show off the oysters. Pepper Grove, Possum Pass, Lady’s Pass, Hanna’s Reef, Elmgrove and Todd’s Dump from Galveston Bay were represented. We also sampled oysters from Lavaca Bay, Mad Island in San Antonio Bay and Chain Island in West Matagorda Bay. Oysters from other Gulf states, were all identified by specific place names, there the famous Bayou Cook oysters from Louisiana, farm-raised Point aux Pin oysters from Alabama and East Bay oysters from Florida. All together, we had nine Texas oysters and one each from Alabama, Florida and Louisiana.

The assembled tasters talked about differences in “saltiness, sweetness, and creaminess” Some oysters were judged too small, some too big. Everybody had a favorite, but there wasn’t any one oyster that came out a clear winner. The variances in flavor were easy to discern. Even the oyster men who attended the tasting were surprised by how distinct each oyster tasted.

Where do we go from here? Three restaurants have already contacted Jim Gossen at Louisiana Foods to request help in setting up Gulf-appellation oyster bars. I will keep you posted about where you can buy Texas oysters by place name.