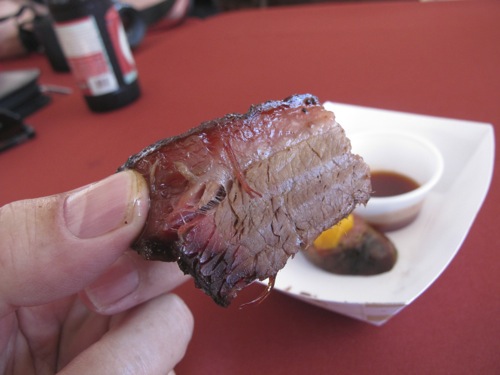 Snow’s brisket is famous. It comes with the somewhat dubious Calvin Trillin seal of approval. Ever since Texas Monthly rated Snow’s the best barbecue joint in Texas, I have felt it my duty to join the crowd and make a pilgrimage to the hamlet of Lexington. Yesterday, I got lucky–I scored a sample of their brisket at the Texas Monthly Barbecue Festival without a pre-dawn drive in the country.

But I was called out in public for not sampling Snow’s until now: “What took so long, Robb?” asked @BarbecueSnob Daniel Vaughn via twitter.

Back in 2008, I explained my recalcitrance and questioned Calvin Trillin’s judgement at length in a

But I gave Snow’s brisket a fair chance. And to be honest, it wasn’t nearly as good as Franklin’s brisket which was being sliced a few booths away. Apparently, my opinion was shared by the rest of the crowd who voted for the “People’s Choice Awards.” Franklin’s won the Best Brisket category. And Franklin’s is actually open at lunch time. Kudos to the Texas Monthly Barbecue Festival for providing a chance to finally compare the two famous briskets side by side. 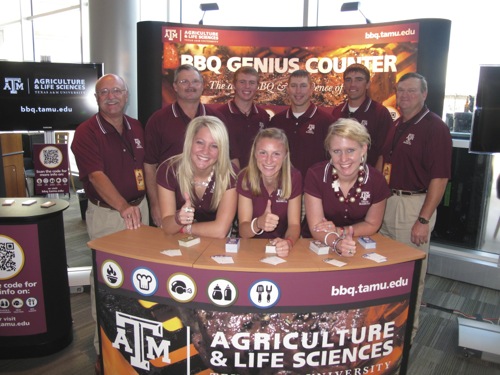 A new feature of the Texas Monthly Barbecue Festival this year was The Barbecue Genius Counter, staffed by students and professors from the Texas A&M Animal Sciences Department Meat Science Center. At last, an opportunity for barbecue fanatics to find answers to such burning questions as: What is a tri-tip and how do you cook it? And: Where can I find an 80 pound whole pig for my barbecue pit?

The Barbecue Genius Corner was also answering questions about Foodways Texas BBQ Summer Camp which be held again next June at the Texas A&M Meat Science Center in College Station. The event is limited to 50 students and is sure to sell out. Your best bet to get a ticket is to become a member of Foodways Texas right away since Foodways Texas members will get advance word when tickets go on sale.