Skip to content
Skinner Pasta will be donating a couple of hundred pounds of spaghetti to the Sacred Heart Society Spaghetti lunch this week. I’ll be there on Thursday March 8 signing my new book Texas Eats and telling spaghetti lovers about a contest Skinner is sponsoring.

Skinner Pasta started selling spaghetti in Texas in 1912. For most of the last hundred years, it was the only brand widely available in Texas grocery stores. To celebrate their anniversary, Skinner has hired me to help publicize the “100 Years of Mealtime Memories” Essay Contest. The writer of the winning essay gets a Grand Prize of $10,000. Four “First Prize” winners will receive $1,000 each. You’ll find the contest rules here.

$10,000 is a nice chunk of change. But there’s another reason you might want enter Skinner’s “100 Years of Mealtime Memories” essay contest. After the winners are announced, Skinner will share the essays that describe Lone Star food memories with Foodways Texas. Collecting stories about Texas food history is what that organization is all about.

Foodways Texas won’t make the essays public, but the oral history group will sift through the entries looking for information about Texas food traditions that might be worth exploring further. So even if you don’t win, your essay about your grandpa’s spaghetti sauce might end up changing food history. It’s a pretty cool contest. Skinner Pasta is giving away fourteen grand in prize money for family food stories and helping Foodways Texas at the same time. I’ll be giving a portion of the money Skinner pays me to Foodways Texas to help fund the oral history projects.

It was the Italian-Texas chapter in my new book and some of the stories about Italian food in Texas that brought my name to Skinner’s attention. 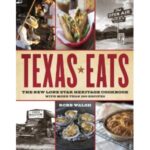 I collected a lot of those stories at the spaghetti lunch over the years. The late Dominic Cuccerre told me about how the Houston produce industry started out with Sicilian-Americans growing vegetables in gardens in the Fifth Ward of Houston and bringing them on horsedrawn carts to Market Square downtown. Dominic’s family had a grocery store too. I could have listened to that man all day.

Here’s one of my own mealtime memories and a couple of family recipes that start with Skinner pasta. Too bad I’m not eligible for the ten grand, right? 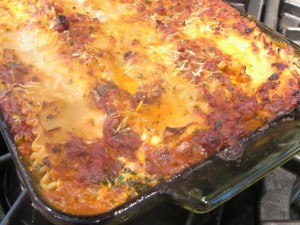 Years ago, I heard an Italian pasta authority give a talk. He said Americans didn’t know anything about lasagna. It was supposed to have 12 layers, etc.,etc. I tried a bunch of gourmet lasagna creations. But the first time my kids tasted my mom’s lasagna, they demanded that I learn to make it the way “Nana” did.”

My Mom layered three curly-edged Skinner noodles into the bottom of a glass baking dish with her homemade red sauce, spooned in smashed meatballs and ricotta and then repeated the layers with noodles on top. I thought it was crazy to make meatballs and then smash them up–why not just use ground meat. But I don’t ask questions anymore, I just follow Nana’s recipe. It’s wonderful when family recipes get handed down through the generations. I’m sure my kids will want to learn Nana’s recipe someday.

Here it is. Be forewarned it takes all day.

First you make an old-fashioned red sauce or “red gravy” as we say in Texas. Mom got this one from an Italian lady down the street when I was a kid–that was 50 years ago.

Heat the oil in a Dutch oven over medium high heat. Brown the beef and sausage in batches, transferring the browned meat to a bowl with a slotted spoon. When the meat is all browned, reduce the heat to medium and add the onion, celery and carrots. Use the vegetables to deglaze the pan scraping up the browned meat the stuck to the bottom. Cook for three minutes until the vegetables begin to soften. Add the garlic and stir to mix well. Cook another two minutes until the onions are translucent. Add the white wine and turn the heat to high stirring constantly for three or four minutes or until the white wine is reduced by half. Add the tomato juice, crushed tomatoes, tomato sauce, and tomato paste, mix well and bring to a boil. Reduce the heat to a simmer and add the remaining ingredients, stirring to combine.
Simmer for two hours stirring every fifteen minutes.

I always thought you were supposed to bake the meatballs or at least brown them on the stovetop first, but that’s not the way Nana does it.

Finally, after all that work. You get to make the lasagna. If you buy get the one pound package of lasagna noodles, you will have enough noodles to make 2 big 9 x 13 baking dishes. That’s the way Nana does it. She cooks one right away and puts the other one in the freezer for unexpected guests–like me and my kids.

Boil and rinse noodles in cold water. You should have nine noodles. Crush the meatballs in a bowl with the sauce that adheres to them. Pour 2 cups of red sauce in the bottom of a 9×13 inch baking dish. Arrange three noodles across the bottom of the dish. Spoon half of the meatballs onto the noodles.
Spoon the ricotta into a mixing bowl. Squeeze the spinach to remove as much water as possible. Chop the green onions finely using a little of the green part. Add the spinach to the green onions on the chopping board and chop together mixing well. Add the spinach and green onion mixture to the ricotta. Add one cup parmesan and stir well to combine. Season with salt and pepper and chopped serranos if desired. Spoon half of the ricotta mixture in with the crushed meatballs dotting it evenly around the baking dish. Top the filling with 9 mozzarella slices or grated cheese. Add more sauce and another layer of noodles and repeat ending with a layer of noodles. Top the noodles with some sauce and three tablespoons of parmesan. Bake in a 350°F oven for half an hour to 45 minutes or until the cheese melts and the lasagna is bubbling. Allow to sit for a least a half an hour before cutting into squares and serving. Serves 12.