It’s hard to figure out where Texas cooking is headed right now. There are a lot of different trends going on and they have little to do with each other. In fact, sometimes it seems like the chefs in Dallas, Houston, San Antonio and Austin arrived here from different planets. In this series, I’ll check out food from some hot Texas chefs and look for clues about the big picture. 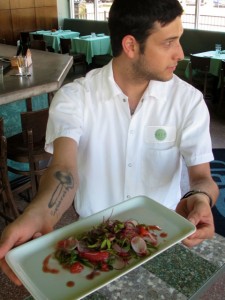 Felipe Riccio’s “Rainbow Runner-Mayhaw Ceviche” appetizer at Reef in Houston, is a marvel. It combines two unique ingredients in a sensational dish that neatly sums up the restaurant’s philosophy.

While restaurants in Dallas and San Antonio concentrate on finding local sources for produce and meats, chef Bryan Caswell at Reef in Houston has led the way in expanding the definition of locavore to include local waters. Reef was one of the first restaurants to identify Galveston Bay oysters by specific reef names. Caswell and fishmonger P.J Stoops have helped launch the “Texas trash fish movement” in Houston and Austin.

“Trash fish” refers to underutilized species like sea bream, tripletail, and rainbow runner. These bycatch fish are harvested accidentaly while fisherman are targetting something else; creating demand for them is one key to building a sustainable fishery.

Rainbow runner is a member of the jack family. To make Reef’s rainbow runner ceviche, the flesh of the fish is salt cured and the bones are used to make a fish jus that is reduced with Maderia. The fish is marinated in mayhaw vinegar, which “cooks” the ceviche. The fish is served with blood orange supremes, pickled Gulf sea beans (a kind of seaweed), and pickled mayhaws.

Mayhaws were once gathered wild and turned into the mayhaw jelly sold at East Texas farmstands. The “haw” is the fruit of the hawthorne tree, and May is the season when its ripe, hence “mayhaw.” The traditional East Texas fruit has become rare in the wild and is now grown on a handful of farms including Jackson’s Fruit Farm in the Big Thicket where Reef gets its mayhaws. 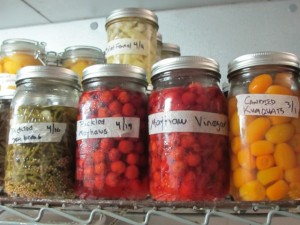 Pickled mayhaws, pickled sea beans and candied kumquats are among the jars and jars of things you’ll find in Reef’s refrigerator–the kitchen turns out a steady stream of pickles, vinegars, syrups and preserves made from local produce on a weekly basis.

Riccio has been at Reef for two years now, he became sous chef one year ago. He received his training at HCC’s Culinary Arts program. In his last job, he worked with French chef Frederic Perrier at Aura Restaurant. The French have long been an inspiration when it comes to trash fish–bouillabasse was first concocted by fishermen’s wives as a way to use the varieties of fish that no one wanted to buy.