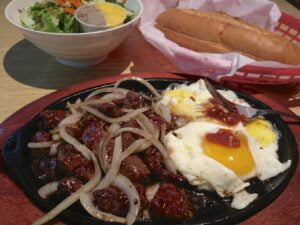 The Vietnamese steak and eggs at b-10 are a new take on the classic bo luc lac, the Vietnamese dish better known as “rock n’ roll beef.” At b-10, they use high quality filet mignon marinated with lemongrass instead of the authentic chewy cuts served in Vietnam. The steak and egg combination is an American coffee shop breakfast favorite and the sizzling comal is borrowed from Tex-Mex. I puzzled at the plastic cup half full of pate and half full of mayo. “Stir the pate up with the aioli and spread it on your baguette, that’s what the kids do,” my tablemate Thuy Tran instructed. It was excellent advice. 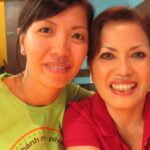 Thuy Tran and her mom Thu Ho filled me on the complicated saga of their Vietnamese restaurant. b-10 Vietnamese Cafe was called Givral when the banh mi and pho restaurant on Bellaire was first opened in 1988 by a Vietnamese man named Hoang. The most popular order there has long been b-10, the barbecued pork banh mi sandwich. 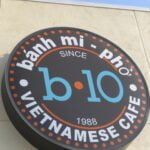 Recently, the restaurant changed its name from Givral to b-10 Vietnamese Cafe and opened a satellite sandwich shop at Westheimer and Hillcroft. The name change ended the confusion among the three Houston Vietnamese restaurants named Givral–the other two are Givral on Milam and Les Givrales Kahve on Washington. 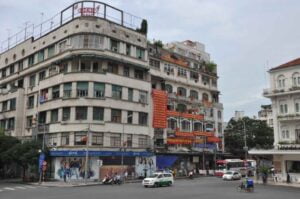 The namesake of the Houston restaurants was the original Le Givral Cafe which was located at the corner of Dong Khoi and Le Loi streets in Saigon, now known as Ho Chi Minh City. For over 60 years, the historic Le Givral Cafe was the favorite meeting spot for travelers and Saigon-watchers. It closed in April of 2010 when the owners of the building decided to demolish the center for new construction.

In fact, Thu Ho told me, she opened the first Vietnamese restaurant in Houston in 1977. She was working for a lawyer named Steven Finch who also owned a coffee shop called Boston Tea at the corner of Milam and Franklin. Finch sold her the coffee shop for forty-five thousand dollars. Thu Ho introduced a Vietnamese menu featuring pho and other homestyle Vietnamese dishes there, though she never changed the name. Boston Tea closed after three years. Mai’s on Milam opened in 1978 and is now the oldest Vietnamese restaurant in Houston in continuous operation. Thu Ho bought the Givral on Bellaire in 2002. Her daughter, Thuy Tran, joined her a few years ago. 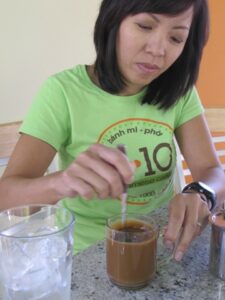 At the original restaurant, Thuy Tran has helped to expand the dining room, modernize the menu and graphics, and install a POS computer ordering system. Thuy also opened the Westheimer b-10 location, a streamlined version of the original restaurant with a build-your-own menu and lots of lunch combos. I met Thuy at the new Westheimer b-10 location for a Vietnamese coffee early one morning. After I stirred the coffee to mix in all the sweetened condensed milk, I was about to pour it over the ice when she stopped me. “You have to froth it up,” she said. She stirred the coffee vigorously with the spoon until a froth formed on top-then she poured it. “See,” she said pointing to the bubbles that coated the ice cubes.

Along with the sizzling comal bo luc lac variations, Thuy has come up with some other new items. A crawfish banh mi special has been very popular. And then there’s the “Sloppy,” a banh mi riff on the sloppy joe with curry instead of barbecue sauce and topped with basil leaves and pickled green papaya instead of pickles and onions. The sloppy is sensational with a little of b-10’s dried chile sauce or a healthy squirt of Sriracha. A fried egg would probably put it over the top.

This second generation Vietnamese restaurant owner is out to change some preconceived notions. “The older generation felt that Asian food had to be cheap. But you don’t have the whole family supplying free labor anymore. As we move out of Chinatown to new areas, we are pricing our food to make a fair profit,” she said. She is also working to make the menu less intimidating to non-Vietnamese. “It’s a balance,” Thuy said of the modernizing process. “My mom wants to keep everything exactly the same, and that’s good because it keeps us focused on our traditions. We are changing very slowly, but even my mom loves the new menu.”