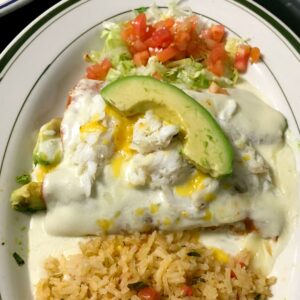 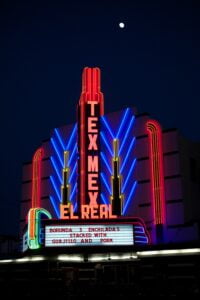 Our Suizas sauce is a bechamel sauce with sour cream and seasonings.

I noticed that the recipe of the week at the Houston Press website is also enchiladas Suizas. The recipe given comes from food TV celebrity Marcella Valladolid, a native of San Diego and it includes tomatillos.

Brooke Viggiano at the Houston Press quotes another writer from San Franciso who credits the name Suizas to Mexico’s Swiss immigrants. If anyone has any information on the location of a Swiss Colony in Mexico, please fill me in! There were only 5,000 Swiss in Mexico in 2011 according to Wikipedia, and I can find no mention of an earlier Swiss migration.

The image of La Lechera, as the fetching Swiss Milkmaid on the Nestle label is known in Spanish, and this restaurant recipe for enchiladas Suizas supplied by Nestle using its canned milk supports an alternate explanation. 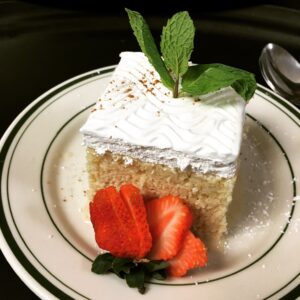 20 years or so ago, when I was interviewing Chef Michael Cordua of Americas and Churrasco’s fame, he offered a personal view on the history of Tres Leches cake. Cordua explained that here in the United States, canned milk isn’t held in very high regard by chefs. 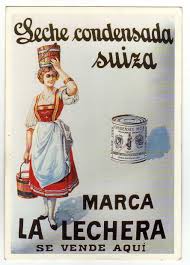 But he said that during his childhood in Nicaragua, canned milks, which were usually imported to Latin America from Switzerland, were a luxury. Local fresh milk was suspect as it was frequently stretched with water (often contaminated). According to Cordua, the original Tres Leches cake recipe was printed on the back of a Nestle milk can–the 3 milks were Nestle evaporated milk, Nestle sweetened condensed milk, and whipped cream or another milk. The theory that Suizas, or “Swiss-style,” is a reference to Swiss canned milk is pretty persuasive.

Post Script: A Saveur article with recipe suggests that Enchiladas Suizas was invented at Sanborn’s Cafe in Mexico City in 1950 and that the name does indeed refer to the liberal use of dairy products.