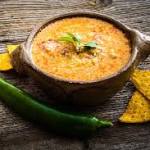 A Wall Street Journal reporter who grew up in Arkansas wrote an article titled:
Don’t tell Texas, but Arkansas is laying claim to queso. I am quoted in the article recounting the time I was invited to judge their “Cheese Dip Derby” up in Little Rock. I declined, of course.

There has been much ado from these parts. Even a little sympathy for the hapless Arkansans.

And today I have received many emails and tweets asking about the history of the dish.

Some credit Switzerland’s fondue, recipes for that melted cheese dip first appeared in a cookbook in 1699.

In the WSJ article, I read that Lisa Fain is tracing the dish to Northern Mexico. The article also says she is working on a Queso book.

Thanks to Barry Popick at the Big Apple for his post on Chile con Queso (December 23, 2006):

According to Barry, the first use in print seems to be from 1920 in Iowa, which would contradict the claim that “cheese dip” was invented in an Arkansas Mexican restaurant in 1935. The article seems to be referencing a culinary experience while traveling elsewhere. Several other citations point to the popularity of chile con queso in Southern California. There also a recipe from the LBJ Ranch.

17 June 1920, Nashua (Iowa) Reporter, pg. 3?, col. 6:
Pepper is the source of Mexican revolutions, according to many people. Hot tamales, chili con carne, which means pepper with meat; chili rellenas, chili con queso, or pepper with cheese; all the other hot dishes that delight the Mexican palate, are supposed to incite these fiery Latin-Indian folk to actions that people of more mien would not contemplate.

4 November 1947, Chicago Daily Tribune, pg. 25:
Chili con queso made a bigger hit at my table than even the sout-of-the-border barbecued chicken. Chili con queso is a cheese and pepper toast, um-mm, but good!

1 February 1954, Los Angeles Times, “Recipe of the Week” by Lola Turley, pg. B6:
This modern version of the traditional Spanish chili con queso, was sent to us by Mrs. Lois Marie Young of El Paso, Tex., and is made with green chilis blended with creamy, smooth cheese and a dash of lively tabasco. This tempting dip is a savory change from the usual line of “nibble foods.”
(…)
Chili Con Queso
Use two and one-half cups canned tomatoes and one small can green chilis. Put both in top part of a large double boiler, place directly over flame. Cook slowly until mushy, adding a little water if necessary. Remove from flame and place over boiling water. Add approximately two pounds cheddar cheese, cubed, slowly and cook until the cheese has melted. Flavor with a dash of tabasco. Serve with tostados, crackers, potato chips or anything with which to “dip.”

1 October 1964, Washington Post, pg. D1:
LBJ RANCH dishes will include chili con queso, pickled okra, guacamole and chili dip. All are favorites of the President and First Lady.
(…)(Pg. D14—ed.)
Here are the recipes from the White House.

LBJ RANCH DISHES
Chili con Queso
1 No. 2 can tomatoes
1 large onion chopped fine
1 bud garlic chopped fine
1 tsp. salt
4 tbsp. chili powder
1 tbsp, powdered comino seed
1 tsp. oregano
1 lb. aged cheddar cheese
Simmer all this except cheese slowly for about 2 hours, covered, stirring often. Uncover, turn heat up high and stir constantly until all fluid is gone and you have a thick paste. This paste can be frozen. If so, set out to thaw a couple of hours ahead allowing for about 30 minutes in a double boiler before serving time. Add to it, in double boiler, 1 pound best aged cheddar cheese cut up in chunks.

Cover and let stand over water that is simmering, not boiling, as boiling water tends to make cheese stringy. Stir occasionally to mix well. Taste and add salt if needed.

Serve in a chafing dish with large size fritos if desired, but tortillas quartered and fried in deep fat are better.