30 years ago, I founded the Austin Hot Sauce Contest. I served as head judge for 26 years. Covid cancelled this year’s party, ending a tradition. 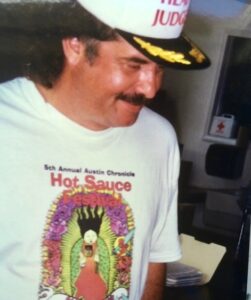 Here’s an intro I wrote for the Austin Chronicle in the late 1990s explaining the origins of the Hot Sauce Contest;

We called it “hot sauce” when I was a student at the University of Texas in the 1970s. Unless you were speaking Spanish, then you said “salsa picante.” At the grocery store, you looked for “picante sauce.” Every Tex-Mex restaurant put a bowl of the stuff on the table. Most of them served it with tortilla chips. In the 1950s and 1960s, before tortilla chips were common, Tex-Mex restaurant patrons ate their hot sauce with buttered saltines. At a few old time capsule Tex-Mex joints like El Patio in Austin, they still do.

When the Southwestern cuisine came along in the mid-1980s, food lovers started calling it “salsa” and chefs started taking it seriously. Exotic interior Mexican salsas made with all kinds of different chiles began to appear. Habanero salsas, green chile salsas, and salsas with exotic ingredients started turning up. I was the restaurant critic of the Austin Chronicle at the time, and I became a salsa connoisseur. 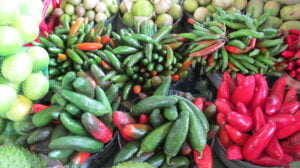 In 1989, the Travis County Farmer’s Market sponsored a gardening competition. While the county agent was perfectly willing to judge peaches and watermelons, he wasn’t willing to munch on jalapeño peppers. So Hill Rylander, who ran the farmers market at the time, called me and asked me to be the chile judge. I actually bit into some raw jalapeños and picked a winner. But I observed that since few people actually ate raw peppers, it might make more sense to hold a pepper sauce competition. Rylander loved the idea and resolved to hold it the next year.

Around that time, I wrote an article in Chile Pepper Magazine calling Austin the hot sauce capital of the world. Predictably, salsa freaks in other cities disagreed. The San Antonio Current, a weekly newspaper in the Alamo City challenged the Austin Chronicle to a contest–San Antonio versus Austin hot sauces–judged blind by top chefs. The first “Hot Sauce Contest” as the event was originally known, was held at the Travis County Farmer’s Market in 1990.

It was held outdoors on a Sunday afternoon in late August–the peak of the chile pepper growing season and the hottest part of the summer. We had a few musicians come and play and we asked a caterer to supply some beer.

For the first few years, my work mate Henry Alvarado, his brother and some friends from El Paso judged along with my brother Dave and my best friend, Phil Born. Don Walser played under the trees and a tradition was born. 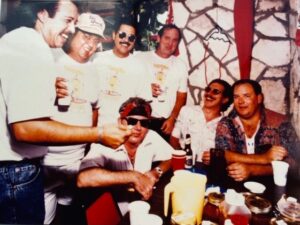 In later years, we invited top Texas chefs like Stephan Pyles and Bruce Auden to be judges. And every year it got bigger. What started out as a contest with a few spectators turned into one of the best parties of the year. When 10,000 people showed up at the Travis County Farmer’s Market one year, traffic came to a halt in north central Austin and we were asked to relocate.

In its seventh year, the Austin Chronicle Hot Sauce Festival, as the event is now officially known, moved to a clearing in the woods of Waterloo Park. There was a lot of apprehension about the move, but as it turned out, the sylvan grove fit the event like an old pair of slippers. The stage tucked neatly between a pair of giant live oaks that kept the bands in the shade. An orderly procession of tents and booths kept the beer and hot sauce flowing non-stop. And plumes of sweet-smelling smoke rising from barbecue rigs, fajita grills and green chile roasters put a lovely blue haze on the edges.

We started out with red and green salsa categories. After a couple of years, we had to add a catch-all category called “special variety” to accommodate the Caribbean tropical fruit sauces that became popular in the mid-1990s. These weren’t the sort of tortilla chip dips that we were used to. They were sweet and hot salsas that tasted best with grilled fish or grilled pork.

We received around 400 salsas on average each year. I would estimate that around 70 percent of the entries were old-fashioned Tex-Mex picante sauces made with tomatoes. These were divided into the fresh-tasting type frequently seasoned with cilantro, and a smoky flavored type with smoked tomatoes and chipotles. (And occasionally liquid smoke.) Green sauces made with tomatillos represent maybe ten percent of the total. The other twenty percent or so are entered in the creative “special variety” category.

A curry-flavored Indian sauce won the special variety category one year. Indonesian sambals, Thai peanut butter satay sauces, and fruity chutneys have all shown up in the special variety category along with such oddities as dried cherry salsas, fig salsas and one that contained coffee grounds. I still remember a dark orange-colored pumpkin habanero salsa from a little South Austin restaurant that won the “Special Variety-Restaurant” category in one of the first years of the contest.

That pumpkin salsa was so good, I went to the restaurant and asked for it some weeks later. Sadly, it turned out they only made it for special occasions. I still remember that salsa and that little restaurant. It was called Seis Salsas.

There was a circular salsa bar in the middle of the restaurant where you selected your condiments. And everyday they put out six different varieties of salsa. I don’t remember much about the food, but I remember the salsas. There was red and green, of course and fresh chopped pico de gallo. There was a ridiculously hot brick-red chile arbol sauce and there was always some variety of dark brown dried chile salsa. And there was a wild card–it could be anything.

Seis Salsas disappeared in the mid-1990s. But the salsa bar concept is still around. It’s an idea worth borrowing for your backyard barbecue. Line up five or six bowls and line them with several salsas and other appropriate condiments. You’ll be surprised how popular the add-ons really are. Salsa is the difference between good and great. And there’s something about the audience participation involved in seasoning your own tacos that makes them taste better.

(Hill Rylander, Phil Born and Don Walser have all passed away since I wrote that piece.)

The Festival moved to Fiesta Gardens in the later years. In 2013, I published The Hot Sauce Cookbook. It recounted the many years of the contest and offered lots of recipes inspired by the sauces we sampled over the years. 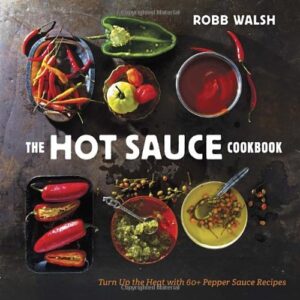 I said goodbye in August of 2016. After 26 years as head judge, the Austin Chronicle graciously bought out my financial interest in the contest and continued without me.

2020 would have been Henry Alvarado’s 30th year as a preliminary judge But this year, thanks to Covid, the party’s over. There won’t be any people standing in line with their entries. And no gathering of preliminary judges–or final judges either. The 30th annual will be a stay-at-home “virtual” event held entirely online. (Check the Austin Chronicle website for details.)

I wonder if the traditional hot sauce contest will ever come back?

Oh well, It was fun while it lasted. 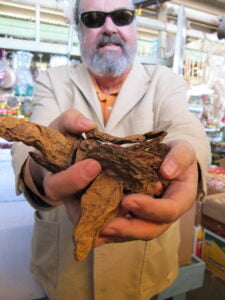 Here’s a hot sauce recipe to make at home:

After you’re done grilling a steak or whatever, take advantage of those hot coals. Stick some tomatoes and chile peppers on the grill and get some nice char flavor for your salsa. Grilling tomatoes over charcoal gives them an even better flavor than drying them in the oven. This is an outstanding everyday table sauce.

Char tomatoes, onion and jalapeños on a grill over dying coals and let them cook for at least 5 minutes turning several times. Chop the charred tomatoes, onions and jalapeños coarsely, then transfer to a food processor. Add the minced garlic and lemon juice and pulse for 30 seconds or until the mixture forms a sauce, but remains a little chunky.

Transfer to a bowl and season with salt to taste. Use immediately or refrigerate for up to a week. Add the cilantro just before serving.